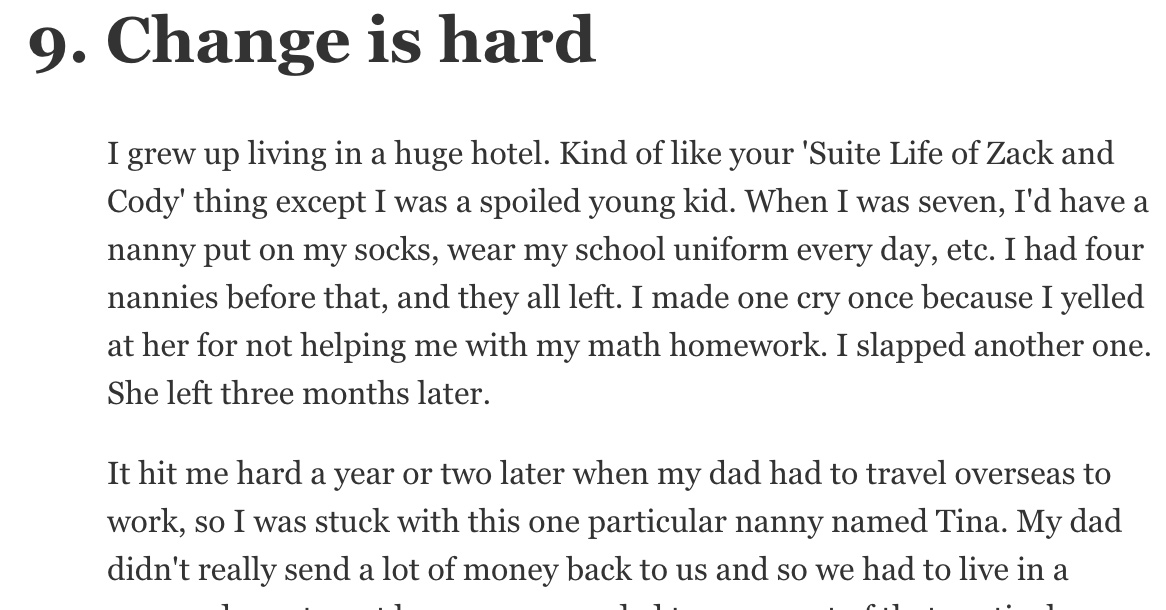 I grew up in a pretty modest family. My parents weren’t well off, but we weren’t in poverty by any means. We did all right, and I worked hard for a lot of what I had then and even harder for what I have now.

Not everyone learns early on what it’s like not having everything you want – in fact, some people live life having everything pretty much handed to them. These 11 Reddit users share the moment when they realized money isn’t everything.

“I had an odd experience because I grew up with extreme wealth then went to living humbly. I’m half Saudi, so I had maids all my young life. I remember whenever my brothers and I got off the airplane, and we were driven to the executive ‘gold’ lounge. However, my parents got divorced, and my mother decided rightly I should live with her back in the UK. So I went from maids in a mansion where my bedroom was bigger than most people’s entire floor (in the UK at least) to sharing a tiny bedroom with my brothers.

I remember my first time washing dishes at school, and I did it with cold water and the other students laughed and said you’re supposed to do it with warm/hot water. I went from buying whatever I wanted to buying second-hand school clothes. It was the best thing to happen to me ever because when I went back and met some of my old ‘friends,’ they were just not normal people. This is when it really hit me, because I just saw how different they were. Fully grown men being catered to by maids in their old age, do they have no shame? Rich coming from me, but hey I mended my ways. Whenever I visit my father, I see my stepbrother who continued being spoiled, a 35-year-old man, never had a job, leeches off his mum. Our maid is 60 years old and she cleans his clothes, washes his dishes, and might as well squeeze his buttcheeks whilst he takes a poop. I refuse to let the maid do anything, and I give her money I have earned. To see such a difference is what made me grateful. I am so glad I didn’t continue growing up spoiled.

Frankly, I didn’t grow up poor either, my perspective of poverty was warped compared to real poverty. Our tiny shared bedroom was a luxury and I’ve learned to never take anything for granted. I’m so glad I grew up normally, I couldn’t stand the person I’d become if I continued growing up spoiled. I work hard now, I support my mother, I have pride, something I’d never have if I continued being a leech.”

“I wasn’t necessarily spoiled, but I definitely grew up in a privileged family. Upper middle class, academic dad and lawyer mum. I was 17, and I got a job as a porter at a hotel to save and travel for a bit before going to college (my dad lives in Singapore so I figured SE Asia).

I went to Indonesia, Yogyakarta to see Borobudur, and I was staying in a decent-but-not-crazy-fancy hotel near the temple. It was my first night and I had no idea if tipping was the normal thing and didn’t have any rupiah on me, so I put a US $5 bill under my plate when I left (working in a hotel you get foreign currency tips, the note was worth more as a novelty).

As the waitress cleared the plates and I was walking away she freaked out, thinking I had left it there. She didn’t speak a lot of English but I got it across that it was a tip, and she basically broke down. It was screw all money so I was really confused.

Made the mistake of googling median wages of the area when I got back. Median, not even minimum, salary is about USD $3,000 a year. What I made in about two hours at a minimum wage hotel job, she made a week busting tail for 80 hours. I tipped WELL all through my trip. Even bought the crappy nicknacks from the hawkers by the temple. It was gutting.”

“I was a spoiled child and teenager. My parents bought me a brand new red convertible for my 16th birthday. I threw a fit over it because what I actually wanted was my brother’s old car, which was dark blue. I was so shallow and a horrible person back then.

The next summer, I took a job as a camp counselor at a local day camp. I did not have to work, but I was bored, and it sounded like something easy to do. God, was I wrong. This day camp was specifically geared to the lower-class families who could not afford childcare during the summer. We served them breakfast, lunch, and an afternoon snack. For a lot of the camp kids, this was all they would eat that day, and on Friday’s they would beg for extra food/snacks to take home for themselves and/or their siblings because they may not get to eat again until Monday. This hit me hard, but that’s not the part that got me the most.

This one kid (around 5 or 6 years old) would refuse to take their shoes and socks off, even if we were going to the public pool that day. I couldn’t understand why until one day he came in limping, like his feet were causing him so much pain. I convinced him to let me help him get his shoes and socks so I could see what might be bothering him. Once I did, it took everything in me not to break down. His socks were covered in blood. His poor little feet were covered in sores and his toes seemed to curl under a bit. He was in so much pain from the state of his feet. As it turns out, he had been wearing shoes about three sizes too small. His family couldn’t afford new shoes. I took my lunch break and went out to buy him new socks and a few pairs of shoes.

This broke me, which I needed. It changed my way of thinking.”

“I was on an all-inclusive vacation in the Dominican Republic with my wife ( we are in our mid to late 20s at this time). Everyone at this place is well into their 50s. This place was nice.

So anyway, we are out to dinner at one of the resort’s restaurants and for our anniversary we were given a cake. The server is a kid in his early 20s maybe even late teens. Super cool guy. Funny, charismatic and worked his butt off. When we first sat down, our table was covered in rose petals spelling things out, and it looked amazing.

We end up getting hammered and walk back to our room (beachfront- private infinity pool opening to the ocean) at about 11 p.m. Mind you, the guy was still with a table I think and still had side work. (We left a $20 on the table and gave the cake to him).

Next morning we wake and stumble to the breakfast restaurant and, it’s like 8 a.m. Soon as I sit down, homeboy comes running up to serve us. Actually started talking to him, and it turns out he lives there. He shares a room with four other employees (he shared the cake with all of them. Beds are stacked and probably arm width apart. He got home at about 1 a.m. and was back working at 7 a.m. He worked open to close seven days a week. He would take his money he earned and give it to his family. This was considered a good job since he spoke English. We gave him $20, which was about 950 peso. Which means I gave him a few days pay for just making us laugh.

The thing was here, their customer service was 100 times that of almost most places I visit. I made sure I tipped anyone that even smiled at me (lots of the other guests we talked to were total human wastes and thought they were gods gift to man).

I spend $20 a day on pointless bull, I can give $20 to people who can then provide for their loved ones.

I now give away my possessions to people. A friend wanted a PC for his kid but couldn’t justify it. Boom, take my monstrosity of a pc. Had a friend get into an accident and insurance wouldn’t cover it for some reason. Here, have mine. When I quit music and ran into a small time band. I gave them all my equipment because I had no need for it (they said they did the math and I gave them $20,000 in equipment). I owned a house in Austin, Texas, and when I moved home, I gave it to an army buddy. If I clean and find out I haven’t used something for 12 months – means I didn’t need it or use it and it’s always donated. When I go to restaurants, I creep on people. See a family taking their kid out but they don’t eat, find out they can’t afford to eat there but it’s little dude’s day. I’ll tell them to order anything; they celebrate his existence they should celebrate too.

I learned happiness is who surrounds you. Not what.”