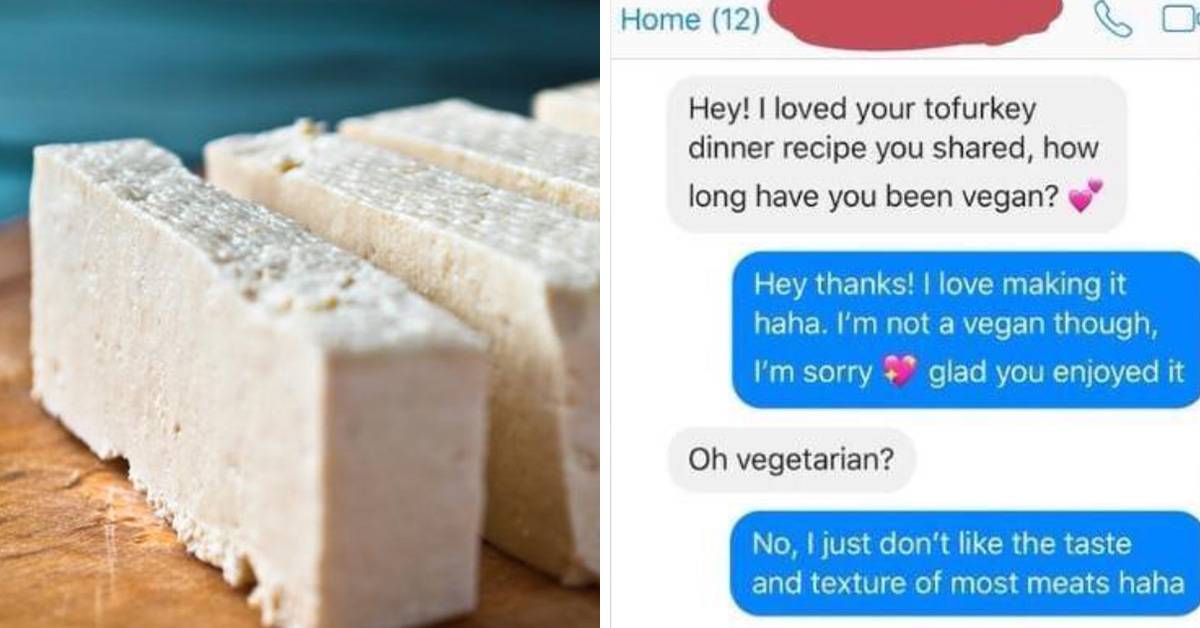 Vegans and vegetarians are always boasting about how incredible tofu is in replacement of meat and other products.

While eating meat can provide our bodies with certain nutrients and vitamins, many vegans and vegetarians use tofu as a replacement. But, there are those who enjoy eating tofu and do not choose to live a vegan or vegetarian lifestyle–nothing wrong with that, right? Apparently, not everyone thinks this way. One Imgur user shared the message thread between her and a vegan friend that has a lot of people outraged.

After sharing a “tofurkey recipe” on a Facebook group, the person messaged them asking how long they have been vegan. But, the Imgur user admitted that although she loves making tofurkey, she’s not vegan. After saying that she chooses to use tofu because she’s not a fan of some meat textures, the person got aggressive and began attacking her for “pretending to be vegan.”

The Imgur user kindly responded that it’s great that the person decided to go vegan, but, she enjoys eating beef. She just enjoys tofu more than some other meats. And–then–the person responded that tofu is strictly for vegans and vegetarians (well, I was unaware of this…). The person then said she wanted the girl to be “removed” from the group she posted the recipe in.

People on Imgur were pretty outraged and pissed off that someone would act this way and make all other vegans/vegetarians look bad.

So are Asian cultures also banned from using tofu?

My meat eating friends love eating my vegetarian cooking. I didn’t realize I was supposed to talk to them about appropriation…

To my mind, the concept of appropriation in this context is ridiculous. No one owns certain foods. Or a haircut. Or a dance. Just stfu.

I’m vegan and I don’t give two shits what other people eat. What a ridiculous thing, telling people what they can/can’t eat. Asshat.